Custom Motorcycle Styles Around the World

Custom motorcycles are a global phenomenon. The international double-take at the diverse global spread of custom motorcycles reflects our unity as humans. We can all appreciate originality. From café racers ripping out of the U.K. countryside and streaking the roads of far-off lands, to the bold American choppers, conquering the highways of the west, custom motorcyles are here to stay.

The café racer is undoubtedly the poster bike of the custom motorcycle scene, both old and new. A café racer is the purest distillation of what a road bike can possibly be. With its Spartan appearance, aerodynamic adaptations, and racing-inspired details, this type of bike is impossible to misidentify. They have moved out of their British homeland and spread across the world with major followings in the U.S.A., Australia, Japan, Germany, France, and now India. 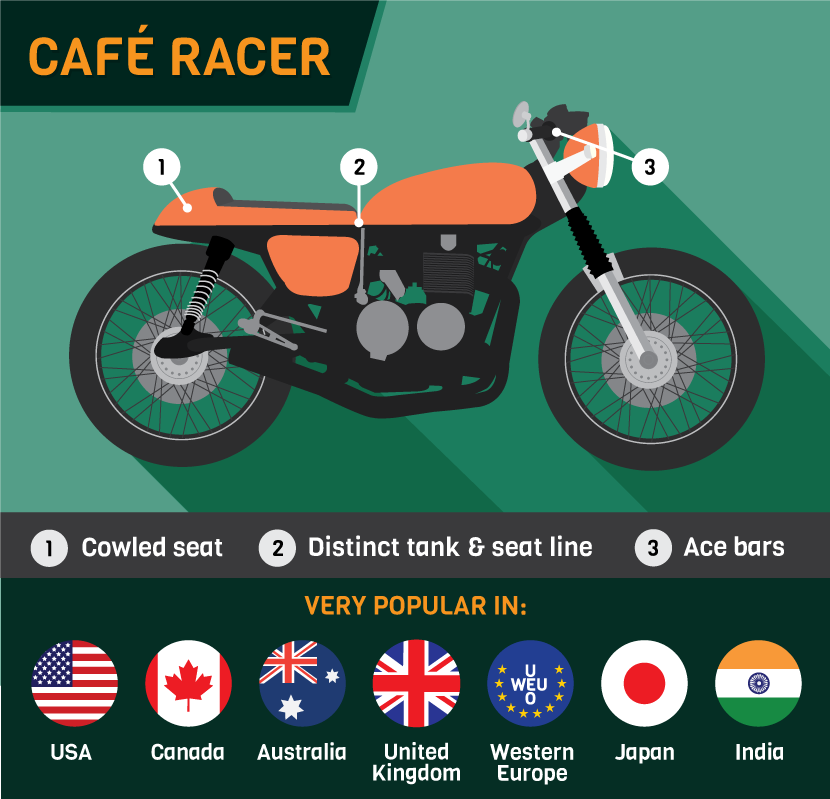 You can easily spot one by its many visual characteristics. The first is the tank and seat; the large tank with knee dents allows the rider to go long distances and tightly grip the bike for high cornering speeds. The seat has a defining “cowl” at the rear with a bum-stopping flick to essentially clamp the rider in for the thrills and spills. The base of the tank and seat form an arrow-straight line, typical of the racing bikes of the time. On top of this are up-swept exhaust pipes, rearward mounted foot controls, and low, dropping, clip-on handlebars, known as ace bars. If you want to know what it takes to convert your street bike into a café racer, check out this article.

The café racer evolved out of a powerful mix of social and industrial factors in 1950s Britain; including the U.K.’s unrivalled motorcycle manufacturing output, young men and women with a growing sense of identity and increasing disposable income, and British success in both motorcycle GP and Manx TT racing. It was always going to be more than just a mode of transport. Young people, for the first time, were able buy and own their own vehicles and make the most of the expanding road network being constructed across the British Isles. Inevitably, with the choice of powerful and exciting bikes for sale at the time, such as the Triumph Tiger T110, the Norton Dominator, and the BSA Road Rockets, along with the lack of speed limits, safety regulations, and age restrictions, competition between owners grew and grew. Just like the famous diners of the American highways, cafés on British roads served travelers on long journeys, and these became the venues that hosted the young riders on their souped-up machines and the rivalries between them.

The bobber is a classic of the custom bike world. It’s easy to spot in the wild, as you will most likely hear it coming before you see it. The slanting chassis, suspension-less rear end, and low-slung stance all scream straight-line power. The homeland of the bobber is still the U.S.A., though it has been embraced by Brits, Aussies, and anyone else looking for the mix of power and attitude it offers. 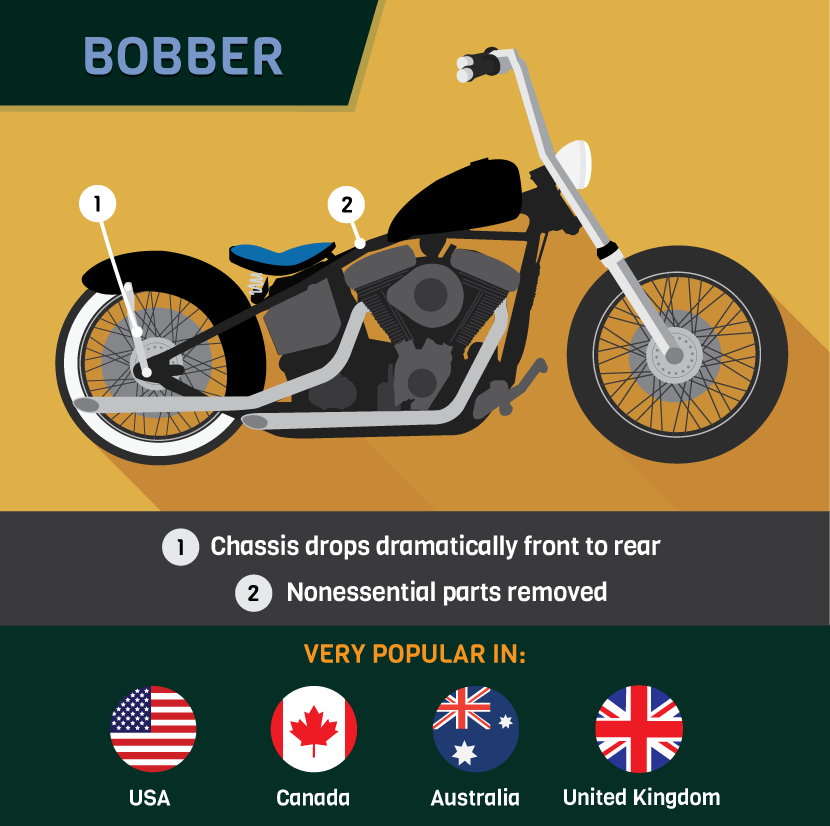 The older American cousin of the café racer, the bobber’s origins are strikingly similar. Though definitively American, the bobber is said to have come from American personnel returning from war in Europe, inspired by the lighter and nimbler machines they encountered overseas. The stock bikes of the day were overly faired-in and lumpy offerings from companies like Indian. Young riders wanted faster, cheaper bikes with more attitude. So the bobber evolved into the squat little hell-raiser we see here. Quite simply, a bobber has been “bobbed” or cut back to its bare essentials. Not to be confused with…

Easily the boldest species of bike found in the wild, choppers are a mix of eccentric features rolled into a highly personalized package.

To qualify as a chopper, a bike must have had major surgery to the front end, near the steering bearing area, to accommodate extremely long front forks. Combined with a smaller front wheel and pulled-back handlebars, or “ape-hangers,” the look is complete.

Other additions often include a high-backed rear seat and tall “sissy-bars.” But it rarely ends there. A chopper is a blank canvas. More often than not, a chopper will be painted with murals or patterns in bold and shimmering colors; if you don’t go big, you might as well go home. 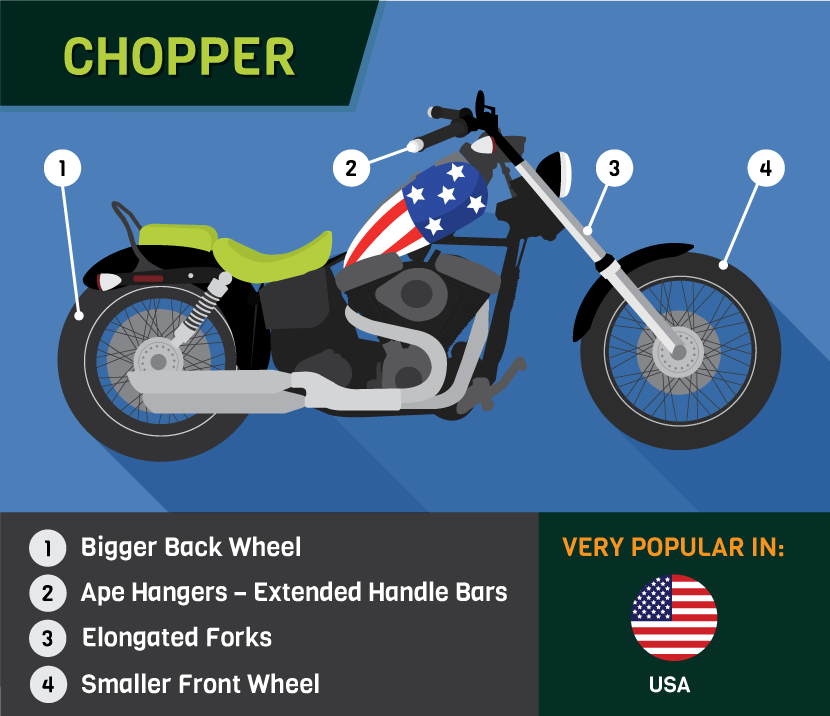 Choppers originated from the bobber building sub-culture in the 1960s but came crashing into the public’s collective consciousness in the 1969 film Easy Rider. Bikes on offer in the U.S.A. were not enticing the general public, but when they saw this movie, a new style was recognized, and a phenomenon was born. These days, its popularity is nowhere near what it was, but the remaining followers are die-hards and can still be found in the western states and increasingly in India.

Another product of the American adaptation of stock bikes designed to meet new needs, flat trackers also have DNA roots in the racing machines from other countries where speedway or semi-rough racing is popular, such as Scandinavia. You could consider it the all-weather café racer, as its inspiration is in competition and in making the machine faster and lighter. These days, the most popular and beautiful tracker builds go nowhere near the dirt and abuse of an actual race – the visual cues are there for aesthetics only. 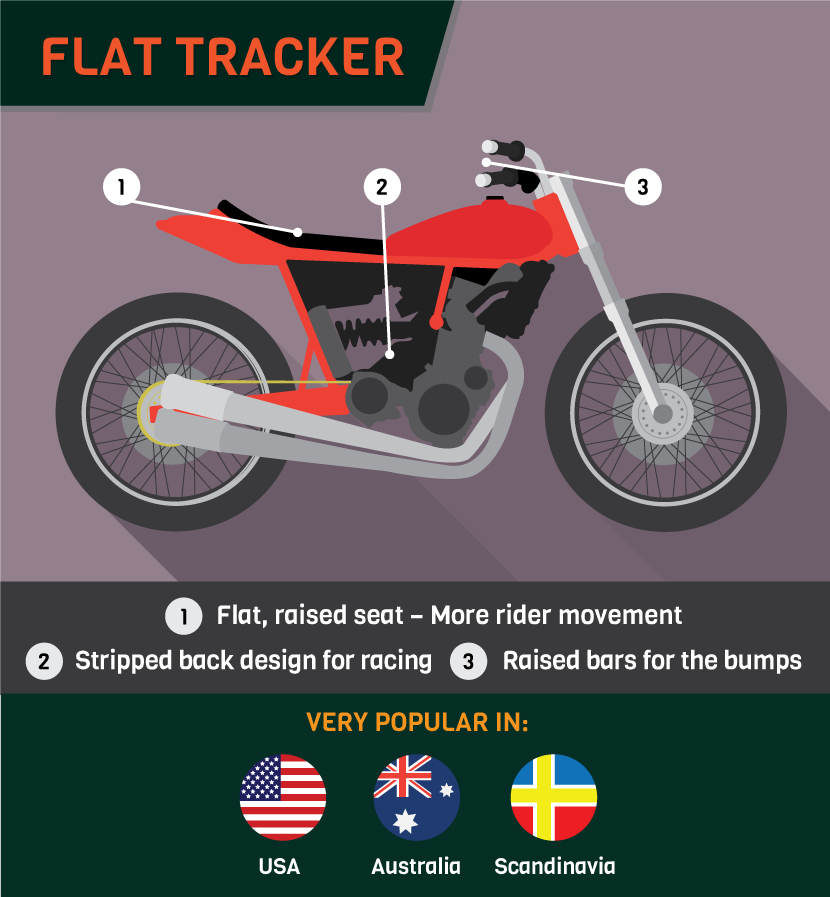 A flat tracker, just like a café bike, is stripped back and pared down. However, there are key differences you can spot. First, the lack of a hump-backed seat allows the rider to slide about on the seat to tackle long bends and ride bumps easily. This also appeals to custom builders, as it allows two people to ride, whereas a proper café would only accommodate one. Second, the handlebars are raised to help the rider tackle the bumpy terrain and absorb the punishment, which also makes it more appealing for a daily ride. The seating position is very much upright compared to leaning forward, and, finally, a good set of knobby tires completes the look.

RAT BIKES – Shabby chic for the roads, whether it be a battered shed find in Europe, a glorified piece of Scandinavian farm equipment, a Japanese parts special, or a rusted hulk of American junk, rat bikes are a powerful rebuke of the highly style-conscious nature of the new custom scene.

ART BIKES – Rare in the extreme, these are the result of the singular visions of inspired individuals. This type of bike is more kinetic sculpture than means of transport. For good examples, check out the work of Max Hazan or Shinya Kimura.

You may like to sit high or low, you may like hard tails or soft, you may like to cruise or go fast. Whichever style you appreciate, and wherever it is you call home, there are amazing custom bikes styles commanding the world’s asphalt.

Shifting the Balance of Power: Why More Women are Riding Motorcycles and How That’s Driving Change