One of the greatest aspects of fly-fishing is the simple joy of casting. Even if you don’t have time to get out on a lake or a river for a full day of fishing, as little as 15 minutes of practice on a lawn somewhere is an enjoyable way to participate in your favorite sport.

Whenever I introduce someone to this sport, I always emphasize the value of practice. Not only is it great fun, but practice with the fly rod builds your comfort and muscle memory so that when you are out on the water and the fish are rising you can put the fly where it needs to be and get the most out of your fishing time.

Of course, practice without mindful intention is not too helpful. You don’t want to be out there building bad habits! A basic understanding of common casting faults to look out for and how to remedy them will help you focus on improvement during your practice sessions and, over time, develop good casting skills. 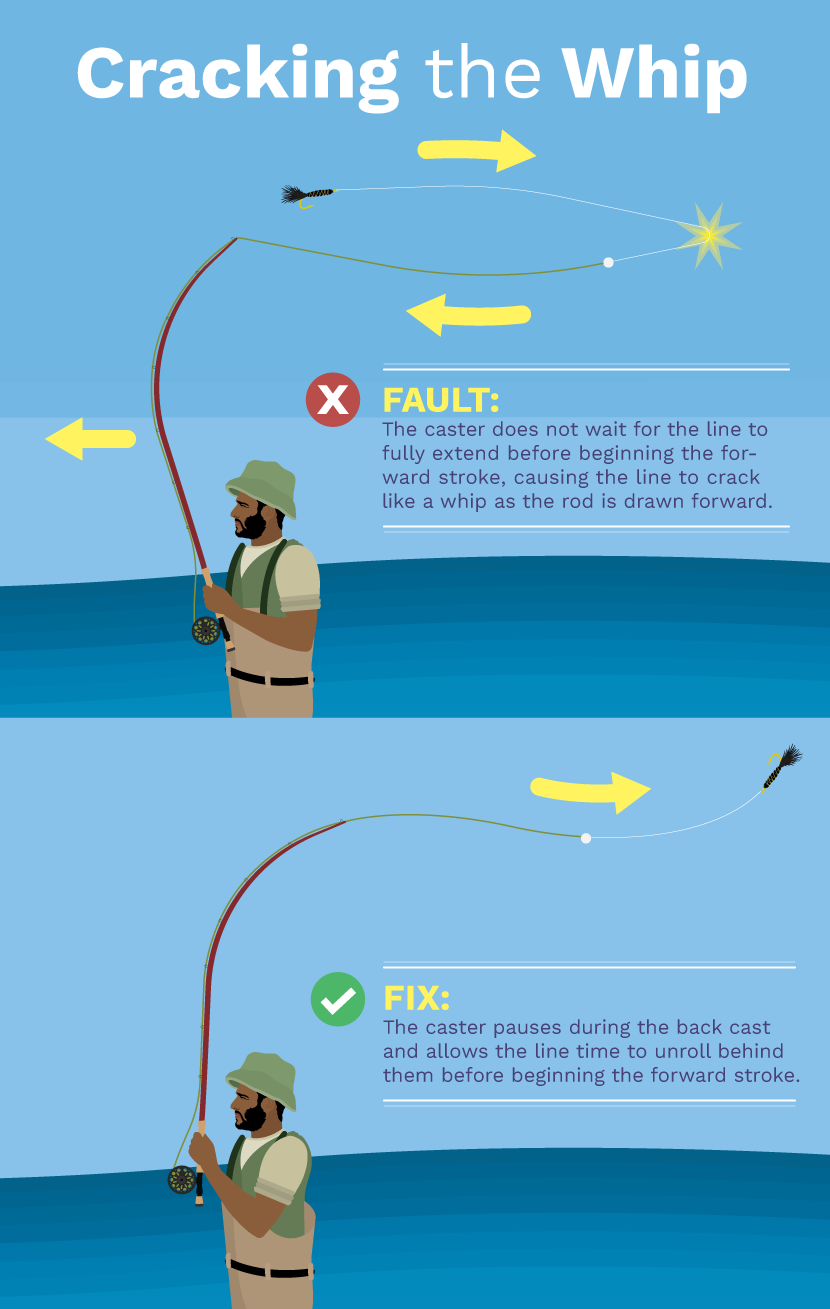 We’ve all done it once or twice. You are out on the water and there are fish rising. You hurriedly tie a fly on and rip some line off the reel. As usual, the fish are out there just a little farther than you would prefer, so you begin false casting, working line out in a frenzy, anxious to put the fly on a fish before the action is over. The line goes back and forth and back and “CRACK.” The sound makes us cringe because we know we’ve just lost another expensive fly, and the line barely unrolls on the forward cast before crumpling in a pile way short of the rising trout.

If your line is constantly making a cracking sound behind you as you begin your forward stroke, it is a sure sign that you are rushing the cast. The key to eliminating this problem is to slow down. The reason you are hearing that sound is because you are not allowing the line enough time to unroll and extend completely in the air behind you during the back cast. When you begin your forward stroke, the unraveling line speeds up as it changes direction and finally makes a “SNAP” sound as it turns over. You must be patient and pause for a moment during your back cast to allow the line to fully extend before you start your forward stroke. 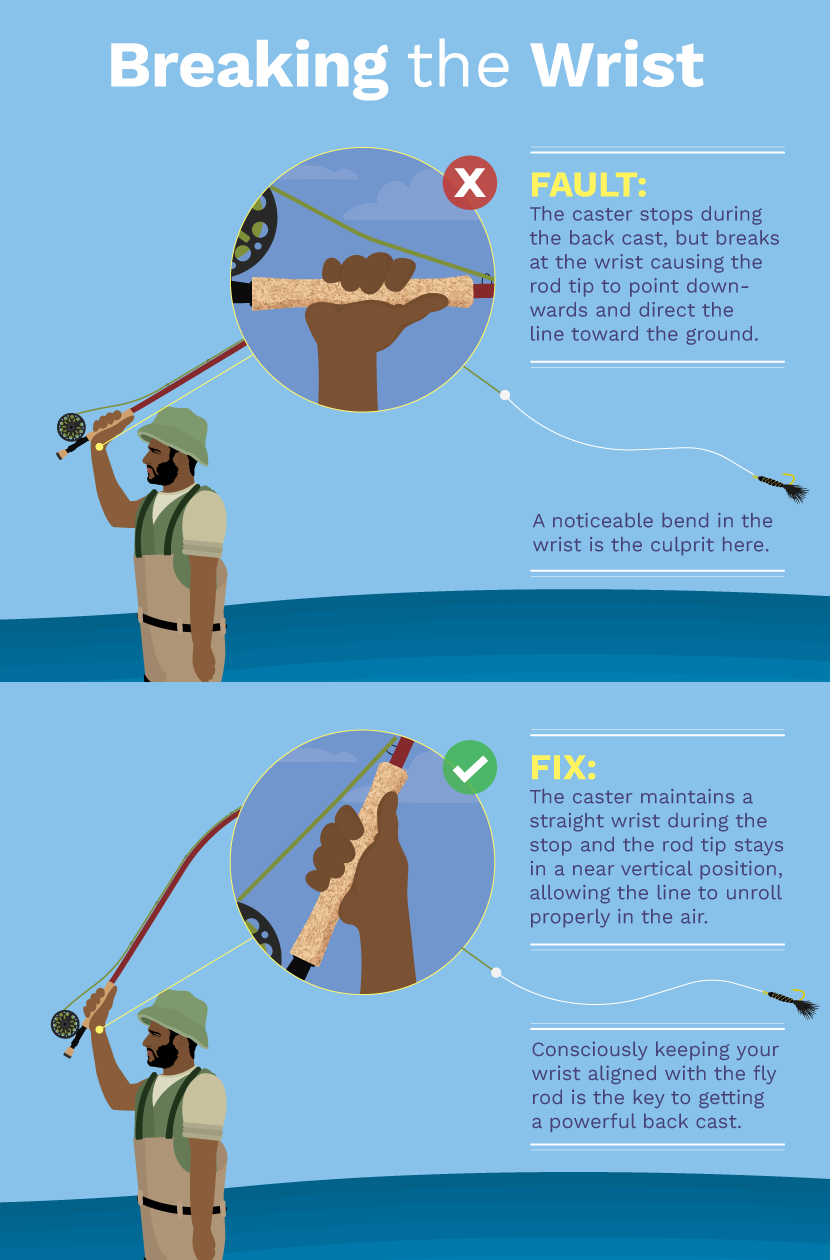 Wrist movement is often a difficult struggle for all levels of fly casters. It is impossible to make a cast without any wrist movement at all; however, too much movement or movement at the wrong time can be linked to any number of casting faults and can plague even experienced fly anglers for years. Here we will address the most common beginner error related to wrist movement: breaking the wrist.

Breaking of the wrist most often occurs during the back cast as the angler stops the rearward motion to allow the line to extend in the air behind them. During this phase of the cast, many people have a natural tendency to bend their wrist backward, which moves the tip of the fly rod off a horizontal casting plane and directs the unrolling line toward the ground behind them. The result is a sloppy, drooping back cast and an equally poor forward cast.

Wrist movement must be mentally and physically trained out of your cast, and it can only be done with practice and concentrated effort. At first, trying to cast without using your wrist may feel unnatural, but stick with it. Make sure you are stopping your back cast high in a near-vertical position, not breaking your wrist and pointing the rod tip back toward the ground behind you. Practice your casts with a short line and complete each cast by laying the line out completely and finishing with the rod low, rather than false casting. Concentrate on what you are doing with your wrist on each individual cast. It doesn’t hurt to watch the line, either!

A very helpful exercise for some people is to wrap a hair tie or rubber band around their casting wrist and use the band to secure the butt of the fly rod during practice. This keeps your wrist in a straight position during the cast and does not allow for much movement. Casting this way will feel awkward, but it will train your mind and body to make the cast using the muscles in your forearm and shoulder rather than your wrist. After one or two sessions you should be able to remove the band and cast more comfortably without it. 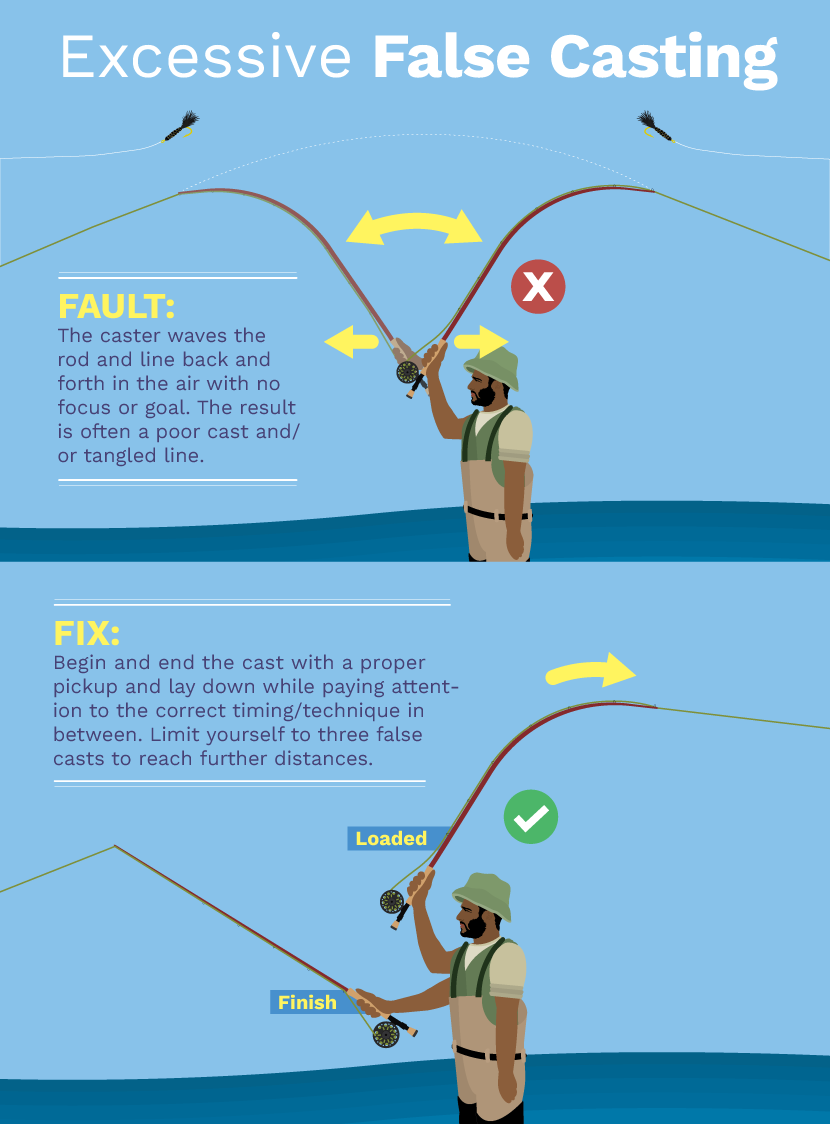 Excessive false casting is something I see many students do, and while there is nothing wrong with false casting in itself, too much false casting can lead to trouble. The first danger – which is especially true for beginners – is moving too quickly and not allowing yourself time to actually practice good technique or learn to feel the cast. Sometimes I have beginner students pick up the rod and begin whipping it back and forth, disregarding all the principles we’ve just discussed! In essence, they are practicing bad habits and not learning good ones.

The second danger with false casting is that it more often than not leads to tangles and wind knots in the leader. The more time the line spends moving back and forth and unrolling in the air, the more likely some subtle flaw or change in the wind will catch it and cause it to tangle up on itself. I have been guiding clients on the river and watched as they got a tangle during a flurry of false casts and continued making more false casts not realizing that they had a growing nightmare of flies and leader happening at the end of their line.

The third danger with false casting is that, too often, too many false casts ruins the rhythm the caster has going and ends up leaving the line in a crumpled mess. I’ve done it before and you probably have, too. You pick up your line and begin casting and working line out with each successive false cast. One, two, three and your line is energized, your rod is loading nicely and you could let go now and hit your target just fine. But something inside you won’t let you do it – you have to get just a little more line out, you go for one more, and as soon as you finish your backward stroke you can feel there is something wrong. The line has lost its energy. You push hard through the forward stroke to compensate, but that just makes things worse. You end up with a tailing loop and a pile of line landing far short of your intended target.

Thankfully, there is an easy fix to excessive false casting. Limit yourself! Most advanced fly anglers agree that it should take a maximum of three false casts to reach your intended target or change direction in normal fishing situations. Less is always better. Remember, you can’t catch a fish if your fly is whirling about in the air above you, so put it in the water where it belongs!

A good practice for beginners is to avoid false casting all together by beginning and ending the cast with the line on the ground. Start with the line fully extended and the rod tip low. Accelerate smoothly to a high stop. Pause for a moment to allow your back cast to extend, then accelerate smoothly to another high stop in the forward cast. As the line unrolls, follow through by pointing the rod tip at the intended target and lowering it to the ground. Start again from the beginning. This practice will slow you down and teach you to focus on the fundamentals of the cast. Ultimately, it will be much more beneficial than waving the line in the air like a crazed cattle roper.

One of the most common and frustrating of all casting faults, the dreaded “tailing loop” happens when the top portion of your casting loop falls below the bottom portion as the line unrolls during the forward cast. As your line unravels to the end of the leader, the crossed sections often tangle with each other, causing annoying “wind knots” and sapping energy from your forward cast. This fault can plague beginner casters and prevent intermediate or even advanced casters from reaching greater casting distances.

The typical cause of the tailing loop is an overpowered forward casting stroke or too much “pushing” action with the thumb or wrist during the forward stroke. This is why it is a common problem with folks trying to cast at greater distances, as they have a tendency to put more effort than is necessary into the casting stroke. Excessive power causes the rod to overflex as you come forward, and the rod tip to fall below a straight-line casting plane. The result is the line crossing itself as it unrolls before you.

The fix is simple in theory but requires a little practice and sensitivity to build into your muscle memory. You need to back off the power during your forward stroke, accelerating slowly and smoothly through the entire stroke and finishing with an abrupt stop. Fight the urge to apply extra power as you come forward or, worse, “push” with your thumb and wrist during the end of the forward motion.

Start with a short line of about 25 feet and begin a series of false casts. I know, I just told you not to false cast, but this is a specific drill for intermediate casters so settle down! I like to do five to ten at a time before putting the line down again. As you cast, watch the loop and the line as it unrolls in the air. Focus on applying as little power as you need to get the line to unroll and sustain your cast in the air. Try and feel the rod load and unload through the back cast and forward cast, using the same amount of effort during both parts of the cast. Work until you can start and stop the rod abruptly in the same place, and form the same loop shape on each false cast.

When you are comfortable with this, add another 10 feet of line and repeat the exercise. Remember that you need to adjust your timing and effort to compensate for the longer line, but make sure you are moving the rod smoothly and deliberately through the casting stroke, avoiding the urge to overpower the cast.

Continue this exercise until you reach a point where you have difficulty sustaining the line in the air or maintaining a uniform loop shape. With most beginner and intermediate casters this happens around 45-55 feet. When you hit this point bring the line back in to about 25 feet and start over, focusing on proper technique and a smooth, slow acceleration with an abrupt stop.

I have said it before and I can’t stress it enough; practice and then practice some more! It is easy to get frustrated and discouraged when learning a new sport or struggling with a stubborn fault, but focus and repetition will prevail and you will succeed. You will be amazed at the improvement even ten or fifteen minutes once or twice a week will bring to your casting and angling. Make sure that when you practice, you are focusing on specific techniques or fixing faults rather than just going out and seeing how much line you can get out. If you can get to a point where you can place a fly accurately and consistently at a range between 10 and 45 feet with three or fewer false casts, you will be able to catch fish in almost any situation you come across as an angler.

How Do You Tie Your Jigs?