There has always been confusion about the word “tuning” when referring to engines. Personally, I like the dictionary definition: “to bring into harmony.” But with motorcycle engines, there are a number of different applications of the word “tune”:

• Engine tuning
• Tune up
• Race/performance tuning
• Stage tuning
• Fully tuned
For the most part, there are two common, distinct applications of “tune” in motorcycle engine technology. The first is where a stock machine is serviced or tuned up, and the second is where an engine is highly modified or race tuned. Here, we are going to consider the different aspects of tuning an engine for competition, as in race/performance tuning. 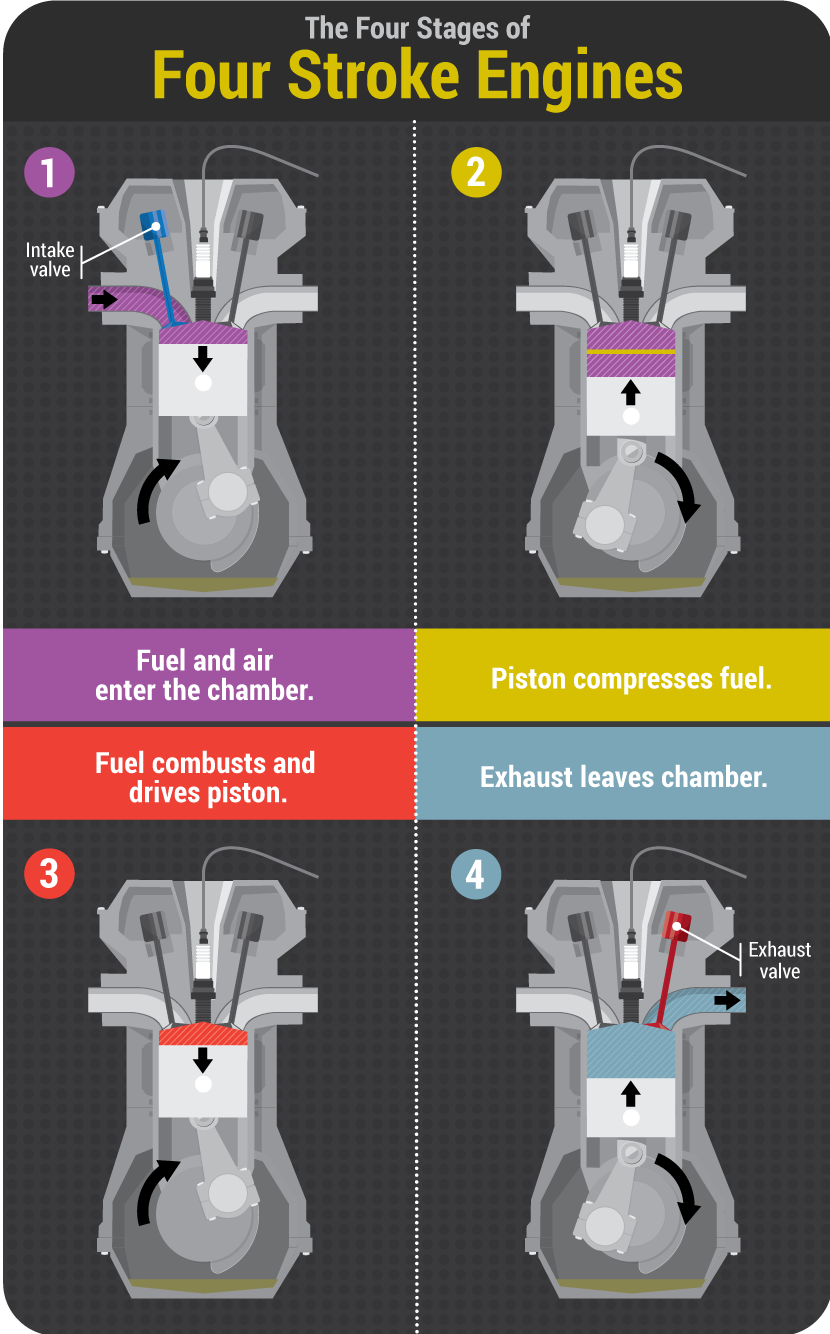 The objective of tuning is to improve the volumetric efficiency of the engine. In other words, the engine will, after tuning, produce more power from the same displacement. For example, a 1000-cc engine may produce 125 hp in stock form and 175 hp after race tuning.

It is very important to understand that tuning a single item (fitting bigger carbs, for example) may not in itself improve performance but will, used in harmony with other modifications, produce the required results. Also, fitting aftermarket tuning parts may not result in the hp increase the individual items claim to provide. For example, 10 items each claiming a 10 hp increase may not give a total of 100 extra horse power, as they may not work in harmony (i.e., in tune) with each other.

The cylinder head on most modified overhead valve (OHV) engines will typically be gas-flowed, will have larger valves fitted, and will have the cylinder head face skimmed to increase the compression. All of these modifications – with the exception of skimming the head – are to improve gas flow.

Modifying the cylinder head (to improve the gas flow) typically involves a process called “porting.” Porting is when you alter the path of the fuel entering the combustion chamber. Fundamentally, porting involves raising the angle at which the fuel/air mix enters the combustion chamber. The higher the fuel comes in, the more power. This process is called increasing the downdraft angle. It also requires thinning the valve guides where they protrude into the port and reshaping the cylinder head where the fuel/air mixture passes the inlet valve. Occasionally, the exhaust port will receive similar treatment. You can make these modifications by hand, with a dye grinder, or with a milling machine. 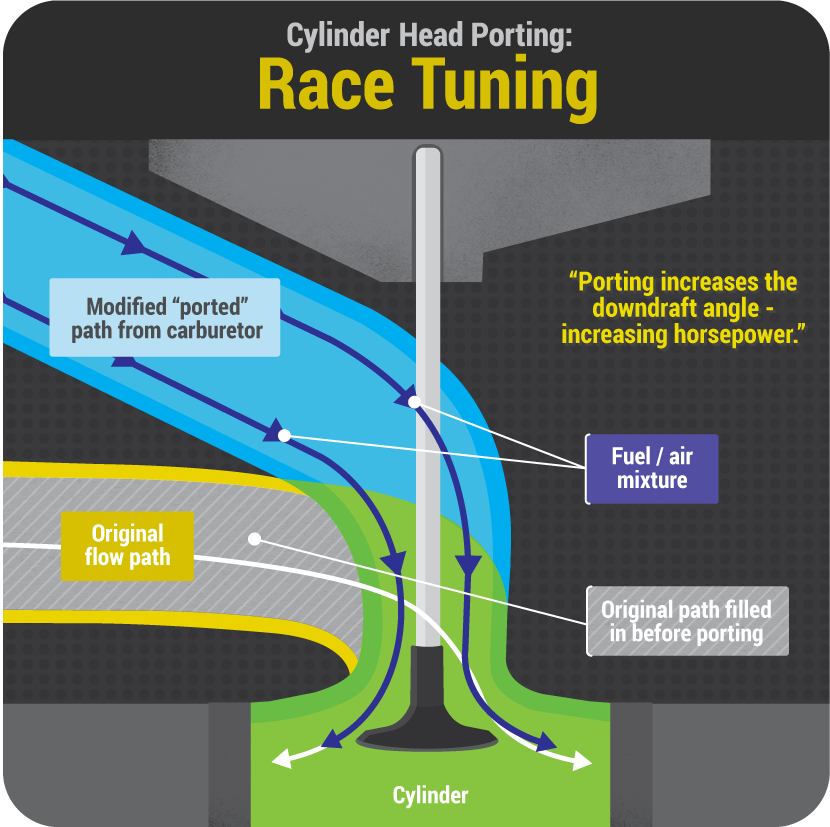 In addition, the OHV operating system will generally be lightened to reduce the total moving mass of the components. To complement the cylinder modifications and the gas flowing, most tuners will fit a new exhaust system and bigger carbs (where fitted).

Regardless of a camshaft’s location within the engine, it will be replaced or modified on a tuned engine. In general, better camshafts will open the valves more quickly, keep the valves open longer, and cause them to “overlap” more (a condition where both the inlet and exhaust valves are open at the same time).

Although it is possible to get camshafts reground to change their shape or profile, it is best to purchase proprietary items from a well-established supplier. The reason for this is simply that grinding the original camshaft will not increase the valve lift (speed of lift and opening duration can be reground) and can, in some cases, cause serious engine damage, as the grinding process can remove any surface hardness the manufacturer saw fit to include in its camshaft specification.

As the power output increases, so too does the load or strain on the components. As such, it is necessary to upgrade some highly stressed components to cope with the extra power and associated heat generated.

Fitting lighter, stronger pistons is necessary on most tuned engines, as they are subject to increased heat and higher stresses (often as a result of a higher operating rpm).

Due to the higher rpm achieved with tuning, the connecting rods should also be replaced with high-performance units such as billet steel, aluminum (drag racing typical), or titanium rods.

In very high performance tuning, the crankshaft must be replaced or modified. One-piece crankshafts are favored by tuners, but modifications to the stock cranks, including welding the crank pins into place and shot peening, are possible. 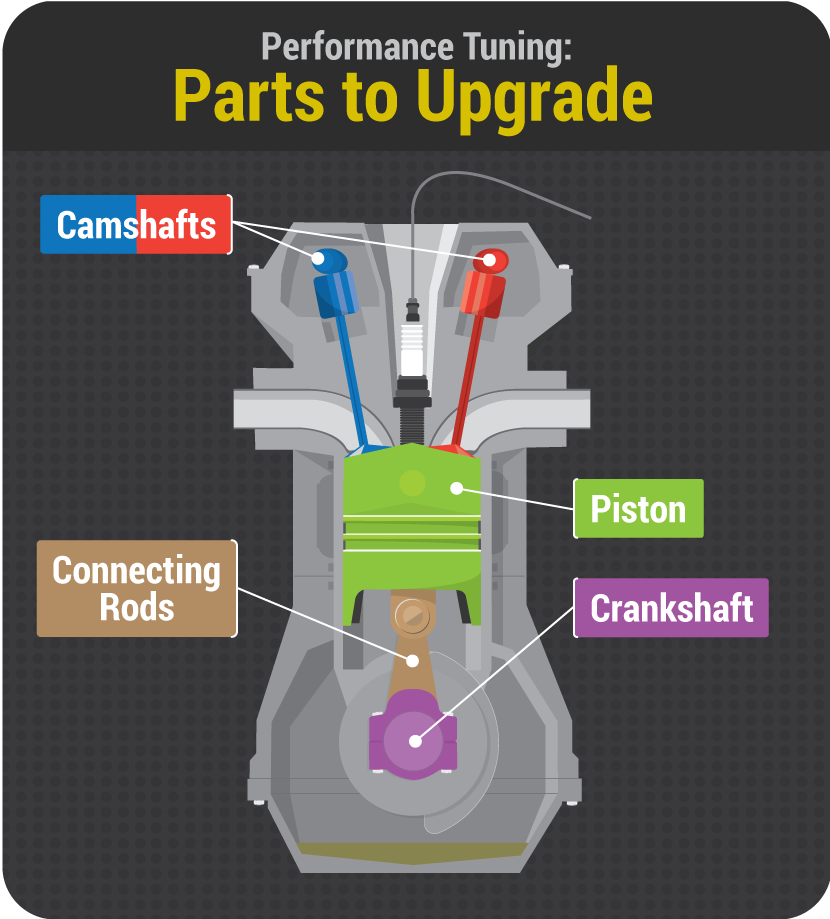 A tuned engine will develop more heat. Therefore, it is necessary to improve the cooling system. In general, most tuners will fit an engine oil cooler as part of any tuning arrangement to offset the increased heat. In addition, most tuned engines will require a slightly rich mixture which, besides helping with the tuning, will have the added benefit of cooling the components as the fresh charge enters the engine.

Electronic control units (ECU) and engine management systems (EMS) are common on most high-performance street bikes in current production. These systems often lend themselves to fine-tuning the onboard computer’s mapping for the fuel table and ignition system. Kits are available for most makes and models of motorcycles fitted with ECUs. Some kits have the advantage of having real-time displays or recording capabilities to enable the owner or mechanic to make adjustments that ensure the correct fuel ratio matches the ignition timing and that both remain inside the safe operating parameters of the engine.

Over the years, almost every type and design of motorcycle engine has been modified to improve its performance. However, an owner must be very clear as to why, and how, he or she is going to do this. Manufacturers spend many hours designing an engine that will perform under many varying conditions, including hours on dynamometers to optimize the design. Making an engine produce more power without reducing its reliability appreciably is a challenge to any would-be tuner. Tripling the power output of an engine for drag racing may seem like a good idea, but if some of its components only last a quarter of a mile…!

Custom Motorcycle Styles Around the World

How to Ride Knee Down